What's In Your World? 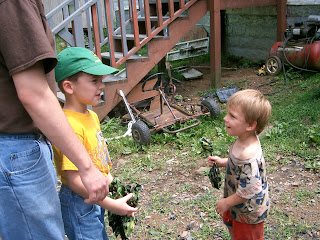 This past Saturday, Chris and Jacob went on a trip to deliver school supplies to Hands of Hope for children. I was excited for Jacob to go - and he was excited, too! He has become increasingly more aware of the world around him. He's noticed that there are some people who are not as well off as he is; and he feels compelled to do something about it. Several months ago he was talking to me about this and decided that he wanted to set up a table in our front yard with a sign attached that said, "Whoever needs money, come over here". He was planning to empty his train bank and give all his coins away. Chris and I commended his attitude, but then told him there were ways to give to make sure he was not exploited in the process. So on his trip, Jacob took some goodie bags that he handed out to the kids he met. He came home exhausted, yet thrilled that he had been able to share his life with the children. He has a broader understanding of the world he lives in than he did before. And a better thought as to where his place in this world is.
Posted by Liz at 8:39 PM