Yesterday, I was down in the basement switching the laundry when I overheard two cowboys tramping down the hall.

Cowboy Eli motions to the open basement door with his gun, "There's a woomin down thar."

Cowboy Eli pokes his head in the doorway, "Wellll, she's not cookin'."

* Autumn has her first tooth. It came through on Valentine's Day.

* Savannah lost her first tooth. It came out a little over a week ago.

* Jacob wants me to post something about him, too. Ummm... Oh, yeah, last week at his basketball game, he got 2 steals and almost made a basket.

* And I might as well say something about Seth. So he won't feel left out. That is, if he could read. We bought him some strawberry heart peeps, and he doesn't like them. Crazy kid.

* Oh, and Chris has officially shaved off his goatee for good. He is still a very handsome man!
Posted by Liz at 11:14 AM 2 comments:

So, even though they don't have to transition until June, many of the television networks will be going digital today. One of our local public channels even has a countdown going on... at 11:59 and 30 seconds pm anyone who has a TV with an analog signal (rabbit ears) will forever not be able to watch their programming. Only those who have "transitioned" to digital - either by purchasing a new TV, subscribing to cable, or buying a converter box - will be able to watch TV. So, are you ready? Or are you going to be left in the dark... (doom, doom...doom, doom)
We use rabbit ears to get our TV channels. Since we live in a large city, we are able to receive all of the major networks, 2 different public stations, and a handful of other channels. And we are "not ready" for the switch. At least, according to the media. Over the last few months, as the news anchors and sponsored commercials have been counting down the days until my screen turns to snow, I've actually laughed. It's just kinda funny to me to think that life might be over if I actually have to experience even one day without a TV signal. Maybe I won't even be able to breathe... AAAGGHHH!!
I'm sure at some point we'll get a converter. But we're not jumping just 'cause the government says to jump. We'll get it when we're ready to. And when our TV signal turns off, we might just actually start being intentional about what we watch. We might go to the library and check out movies we've been wanting to see but just haven't found the time for yet because we've been zoning out in front of whatever happens to be on. We might try some of those free RedBox codes. And please don't even tell me we won't know what's going on in this world. As if all of the news we hear is from the TV! Um, hello, everyone knows there's other ways to know what's going on... And to tell the truth, we haven't actually watched the news on TV in the last week anyway. Plus, now many sporting events are streamed live over the internet - and the ones that aren't, well, that's just a good excuse to go on a date to Smokey Bones (hint, hint). I've always wanted my kids to watch the good ol' cartoons like Bugs Bunny, Porky Pig, Road Runner, Superman, Popeye - and now on Saturday mornings, they can because they won't be busy watching My Friend Rabbit. And when we eventually do transition, in our own time, they can go back to watching Jane and the Dragon and be the richer for it.

The Bahamas was truly a place of rest for us. Chris and I have never been to the beach together without our children or a youth group. It was almost weird to not have to constantly be on the lookout for wandering kids! We went on the nature trail on the island of Coco Cay in the Bahamas; we saw native wildlife such as lizards and chickens. We fell asleep while sunning on the white beach. We saw striped blue and green fish darting around the coral in the turqoise blue water. We spotted large crabs walking sideways on the beach rocks. In Nassau, we bargained for souvenirs in the straw market. We saw the pink police building, the pink court buildings, the pink ministry of health building, the pink restaurants, the pink hotels. (I get the impression Bahamians like pink.) On the cruise ship, we ate "rich people" food - escargots, filet mignon, cherries jubilee, mahi mahi, almond souffle with orange sauce, chilled pear soup. We explored all 12 floors of the ship - which included a huge entertainment theater, 2 swimming pools and 2 jacuzzis, a climbing wall, a sports deck (basketball, ping pong, weight room), spa, a huge conference room full of art for the art auction, casino, 2 large dining rooms, numerous other restaurants and bars, library, business center, plus several levels of outdoor decks. The comedy shows were funny, the love & marriage game show was unforgettable :), the song and dance show was entertaining, and the SuperBowl atmosphere was great!

So that, in a coco-nutshell, is how the cruise went! We took lots of pictures and have wonderful memories. These are my 2 favorite pictures from the weekend. 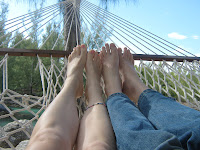