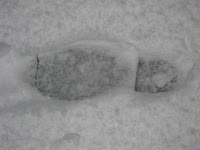 My ears, tired after hearing the downpour of rain for 2 days, strain for the soft sound of snowflakes hitting the windowpane. The clock is ticking in the next room. The blazing fire crackles and pops. I feel a low rumbling. Is that a train? No... "Chris! Is that thunder??"

We are experiencing a rare phenomenon. Thundersnow. At first, I don't believe Chris when he tells me this. Thundersnow? Yeah, like thunderstorm, except that it's snow instead of storm. But I can't deny the weatherological facts. It is snowing. And it is thundering.

Wikipedia, the all-knowing internet encyclopedia, tells me that there really is such a thing as thundersnow:
Thundersnow, also known as a winter thunderstorm or a thunder snowstorm, is a rare thunderstorm with snow falling as the primary precipitation instead of rain. It commonly falls in regions of strong upward motion within the cold sector of extratropical cyclones between autumn and spring when surface temperatures are most likely to be near or below freezing. Variations exist, such as thundersleet, where the precipitation consists of sleet or ice rather than snow.

I am wowed by the creativity of God. Who would have ever thought to mix thunder and snow? It's as if God said, "Ta Da! Announcing snow!" So not only do we have the uncommon appearance of snow, but it has also come in an even more uncommon form. It almost makes the 6-8 inches of accumulation we're supposed to get worth it.

We have bread and milk. We even have hotdogs and lunch meat. We have candles, matches, firewood, and flashlights at the ready. Hot chocolate and marshmallows are calling. The world we live in has shut down and it is just us and the thundersnow.

The heavens are sounding the glory of God; the arch of the sky makes clear the work of his hands. Day after day it sends out its word, and night after night it gives knowledge. There are no words or language; their voice makes no sound. Their line has gone out through all the earth, and their words to the end of the world (Psalms 19:1-4).
Posted by Liz at 9:21 PM