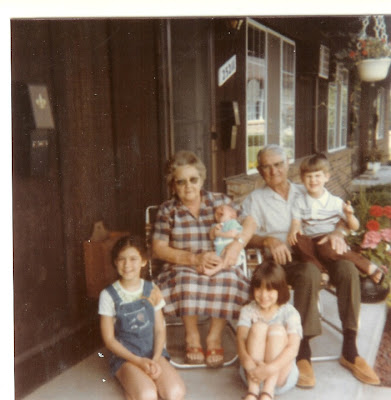 My mom was here last week visiting. My kids call her "Grandma Julie". When I was growing up, we called our grandparents "Grandma" and "Grandpa". All of them. Yeah, I know. It was very confusing. So confusing, that in fact we kids resorted to calling them the "Big Ones" and the Little Ones". Not to their face, but just when we were talking about them to each other. Obviously in this picture, this is the "Little Grandma" since she was very short. The other Grandma was the "Big Grandma" since she was much taller (although she was not nearly as plump) than this one pictured. I was nine years old in this picture. This was taken on one of our annual pilgrimages to Michigan to visit the Grandmas and Grandpas. Of particular note in this photo is my baby brother who is screaming his head off. Very cute, John.

This is Roseanna and Lawrence, my dad's parents. They raised 5 boys, so Grandma was a "tough cookie". I remember that several years before this picture, she had a heart attack. That's when she quit smoking. She used to tell us about how when all her boys were at home and she made cookies, she had to hide the cookies in a special hiding spot so that they wouldn't eat them all at once. I begged her to tell me where she used to hide them; she finally told me, but only after we got all alone in the kitchen and she whispered the secret into my ear. Whenever we would leave at the end of our yearly visit, she always handed a goody bag over to my mom for us kids. It was filled with miniature candy bars, jars of hot fudge, jelly rings and gumdrops. Grandpa was a brick mason. He thought nothing about running around the top of smokestacks at factories, or riding a motorcycle while standing. He even rode his first rollercoaster in his late 80's. He told the best stories about living through the Great Depression. I can still hear his voice in my mind as he would laugh and tell jokes and say things like, "You can say that again!" or "...Go a ways down the pike..." or "You must have a hole in your glass, you need a refill of root beer!" At least once during each visit, he would take us grandkids on a walk up to town and we'd get a donut at the grocery store. I don't know what was more fun - that donut and chocolate milk or playing with the cattails near the pond on the way to town.
Posted by Liz at 3:49 PM