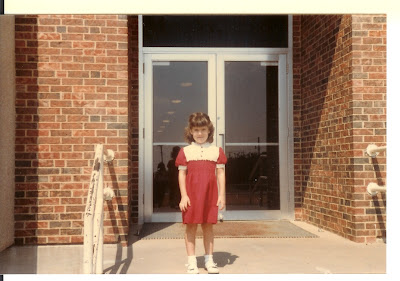 Here I am on my very first day of kindergarten at Holy Family of Nazareth Catholic School in Irving, Texas. I remember being so excited to wear that red dress. Ain't I cute?! I also had a brand new pencil box with pictures of America on it. My teacher, Mrs. Randall, was the loveliest lady I had ever seen. She had high heeled black shoes with no straps in the back so they made a satisfying clicky sound as she walked. She had long curly black hair and she was very nice. My best friend in kindergarten was Mary Garza. I also played a lot with Ryan Sitton. We would go Daddy Long Leg hunting together. Bo and Heidi were also good friends.

My mom taught me how to read and write. I have a long name for a kid to learn how to spell. She would write out my name E L I S A B E T H and then draw little lines underneath each letter so that I could copy my name out. But I thought she was mixing the letters up and wanted me to unscramble them. I would get so frustrated because I didn't know which letter would come next. I think she would get frustrated with me because she didn't understand why I wouldn't just write the letters down. It's funny now.

I loved kindergarten. We learned Spanish; learned to count; learned our addresses and phone numbers; went to the park and fed the ducks; had Halloween, Christmas and Valentine parties; played on the merry-go-round; listened to stories; made crafts.

I wish I was back in kindergarten.