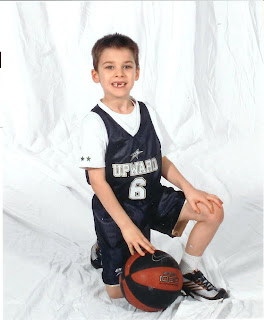 Tonight was the awards ceremony for Jacob's basketball team. From December through last week, every Thursday night was basketball practice, and almost every Saturday was a basketball game. And I've got to tell you, Jacob L-O-V-E-S basketball. He even mentioned to me a few weeks ago that "Maybe God made me tall because it's His plan for me to be a basketball player when I grow up". This from the kid who since he could talk has been planning to be a sheriff (so that he can be a police man and cowboy at the same time). I had to agree with Jacob - Yes, God made you tall, and yes, maybe it is part of God's plan for you to play basketball. In my biased opinion, Jacob was the most improved player on his team. When he started in December, he didn't know how to dribble. But now, he can dribble all the way down the court and shoot the ball at the basket (albeit very slow and deliberately)! And he is a great defender. Jacob's coach was great; every kid on the team had equal playing time in the games, and the boys who didn't have as much experience with handling the ball were the ones who got to take the ball down the court! So Jake got lots of ball time as well as lots of playing time!
At the awards ceremony tonight, the special speaker was Frank Reich - a college football star, and former NFL quarterback. (He played for the Buffalo Bills and has the record for the biggest comeback in an NFL game - they were down by 32 at halftime, and he led his team to victory). He also was the quarterback in the SuperBowl that we (Dallas Cowboys) won against 52-17. But I won't mention that. Frank Reich shared several stories about his sports past and then challenged the kids to make sure they were "shooting at the right goal" with their lives by giving their lives to Jesus. He also gave each kid an autographed football card. Jacob was thrilled, and has now started a new hobby - collecting football cards! Jacob also got a big trophy and a basketball.
This experience has been so good for Jake. The basketball league he was playing in is Upward Basketball. This is a sports ministry outreach through a local church. Chris and I were very impressed by the quality of program and volunteers. And Jacob had a wonderful experience with his first organized sports team.
Posted by Liz at 9:33 PM

Hey Elisabeth,
All three of our boys loved to play basketball too! Rick and I loved going to the games. It was hard to juggle when they all had games at different places, but it was still fun. You will have alot of great memories about the games and it teaches them to be a team player.
Missed you today at Friendship Trays, wish you could have come too.
In Him,
Deb

Thanks, Debbie! I missed it too, but I hear ya'll had a really good time!
Yes, I loved watching Jacob's team play. It was really fun to see him cheer for his teammates as well. And I took about 50 gazillion pictures...